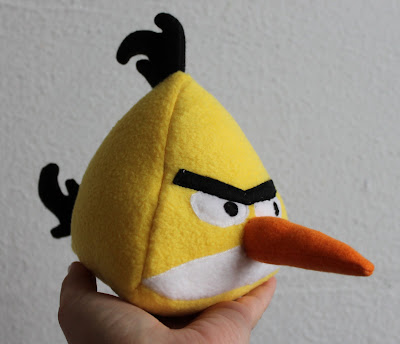 Hee hee! I love him!

(He may have "beak reduction" surgery in the near future... I haven't decided yet. If you think his beak is too long, adjust the beak pattern accordingly -- or whack off an inch or so after you put the beak together!)

Instructions are basically the same as the original Angry Bird.
I also have patterns for the Pig and little blue bird.
And now also the green bird, white bird, black bomb bird, and baby pig!

QUICK rundown:
applique the eyes and eyebrows
sew one triangle to each side of face
make head feathers and tail
insert head feathers in tail in back seam when you sew it up
sew bottom triangle on, leaving a small opening for turning and stuffing
turn and stuff
sew up hole
make beak
sew on beak
DONE!

White bird just needs a beak -- and I've run out of fiberfill stuffing. Looks like I have to hit the store before I can finish the black and green birdies! :o)
Posted by Care at 9:30 AM

He's so cute! He looks like an angry Bert, ha!

Thank you, thank you!!! I've been waiting for the yellow bird - hoping you'd get to him before Christmas. He looks awesome!

Ha HA! This gave me a laugh this morning and I thought the same exact thing Cammie!

HA! He totally looks like Bert -- unibrow and all! I love it! :o

Awesome! I made my red bird and now I need to start on the other ones. Can't wait to get them all done. I will for sure put a pic up in the group when I am done.

I just got back from the fabric store with green for the pigs. Now I need to go back for yellow :-)

I absolutely love it! And I think the beak is super cute that way! :)

Just a quick note to let you know that a link to this post will be placed on CraftCrave today [21 Dec 01:00am GMT]. Thanks, Maria

your birds look just awesome... I stumbled over your blog quite a while ago and look what's new every day now.
Quite inspiring. I'll make sure to post the pics of the birds that I made from your instructions on flickr as soon as possible

oh kay! We are rocking the angry birds now. I'm seriously gonna get the game soon! Also, he looks like he can be related to Bert from Sesame Street. He's got that unibrow thing goin' on too. Also, Bert's a little angry too sometimes!
Merry Xmas, my friend. Lots of love to you and yours!

I see that someone else already said he looks like Bert. Ha!

I love him! You are so, so good at this! I'll be linking. And I love the beak!

4 Angry Red Birds were made the first day of Spring Break. :) Stash diving to make the Yellow Angry Birds today. Awesome. Thank you so much for offering your instructions, photos and patterns for free. If there were two of me I think we'd have the whole lot made x4 by the end of our week. Alas I'm hoping for half of the crew of birds. So fun. Lincoln logs and cereal boxes with angry birds tossed at them - requires no electricity! Woot.

I made a yellow bird! He turned out cute! I used black yarn instead of fleece head and tail feathers and embroidered eyes instead of appliqueing, because it's easier for me, but he's still cute! I call him Rocket 'cuz the yellow birds shoot off like rockets when you sling shot them into the air and tap the screen.

This is the best Yellow Angry Bird I've ever seen. What a talent you got! I will try that. Thank you!

I'm almost finished making the green bird, all by hand. i just don't know how to sew on the beak. Any tips or direction?
Thanks for the pattern and tutorials.

thanks for the tutorial.. i did mine.. Do check it out!..

Thank you! A very interesting lesson. Been looking for patterns of these birds and pigs. My kids will be very happy