This was one of those quilt projects that I obsessed about until it was done! 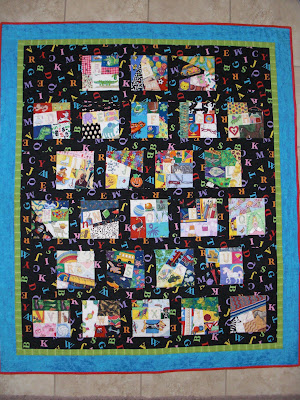 I inherited a bunch of novelty print scraps from my mom who inherited them from a friend of a friend or something like that. This was when Buzz was about 1 1/2 and very obsessed with letters, so I had alphabet on the brain.

One of the fabrics I inherited had the whole alphabet on it, so I cut out each letter to be the center of each block. I began putting the fabrics (along with some I already had) in piles corresponding to letters the objects started with. I was very close to having enough to make blocks out of, so I started a quest to find at least four objects for each letter block. Some of the letters have lots more than four!

I quilted each letter block with its letter, using monofilament thread so it wouldn't distract from the pictures. My boys love looking at each block and pointing out each object!

Here are a few of my favorite blocks: 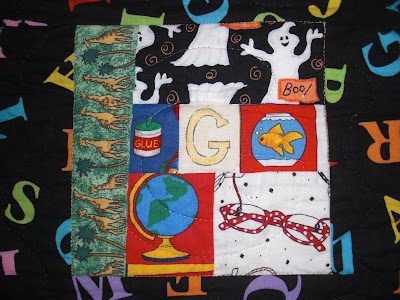 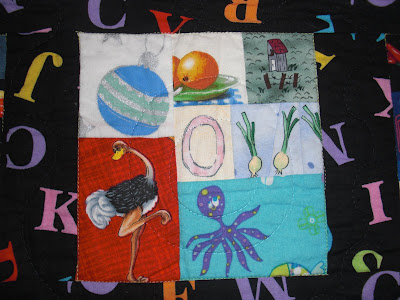 Outhouse and onions! I love it!! 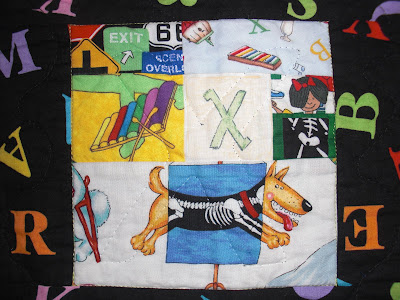 The doggie x-ray is my very favorite fabric find in the entire quilt!!
Posted by Care at 7:21 AM

I love this! I'm always inspired by your projects - thank you!

What a fantastic idea! Love this quilt!

If you need your ex-girlfriend or ex-boyfriend to come crawling back to you on their knees (even if they're dating somebody else now) you got to watch this video
right away...

(VIDEO) Get your ex back with TEXT messages?