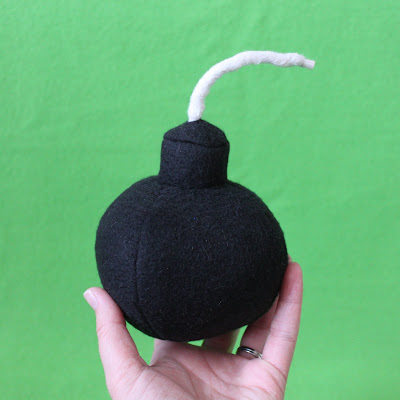 Over the weekend I got an email from Adeela of Sew Kool, sharing a link to the Angry Birds she had created. In one of her photos I saw one of the coolest things I've seen in blogland in quite some time -- a fleece bomb!! I knew instantly my boys would absolutely LOVE to have some -- so I asked her for the details. She put together a tutorial for them. (Click here to pop over -- and be sure to tell her hello!) I finally had a little time this afternoon to put a few together. It took me less than an hour to put together three of them. I opted not to do the flame on the end, although my boys have said they would prefer it. Guess I'll be adding that! Since I was making them with materials I had on hand, I ended up using cotton cording (normally used for piping) for the fuse, rather than yarn. I'm happy with how they turned out -- and the boys are ecstatic!
Posted by Care at 6:31 AM

This is crazy cute! My boys would love these too!!! Maybe the perfect thing for those rough and tumble Easter baskets. :) Thanks for sharing!

That is just plain boy fun!

My daughter's boyfriend loved the angry birds. Guess he probably needs one or 5 of these too.

i love this idea! very cool.

So do you think I can give bombs for Easter? Thanks for sharing! I guess I should start with the angry birds.

What an awesome idea! You can even use them with Mario themed stuff.

It looks great. Thanks for sharing.

I may have to make these for my son and his daddy...They would love it!!!