Got My Sewjo Back

I've been having a "sewing block" for a while now.  All I've wanted to do is cut out squares -- which very handily came at the same time I started my I-Spy fabric swap... and then joined two others... and then had a giveaway for more squares!  Last week I cut out about 1,150 I-Spy squares.  Yipes!!

Well, yesterday I finally got my sewjo back and went to town! 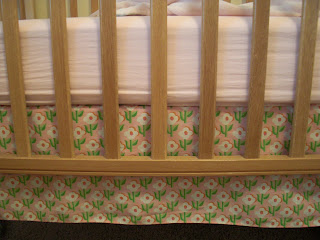 Despite the fact that JellyBean won't be in her crib forever, she will definitely still be in it for at least a year.  I decided I couldn't live with that other bedding for that long!  And, since my strip of fabric was already hemmed on both edges, what is there to lose?  I just went for it.  It took me all of about 20 minutes, and it is so cute! 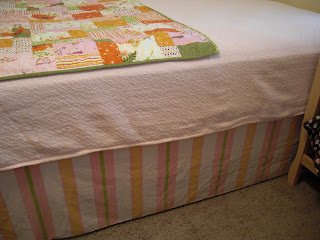 I decided to ditch the crib sheet, however, and used my thrifted sheet to make a bed skirt for the full-sized bed in her room.  I love how it turned out!  I was actually only going to do the two sides that currently show, but in the end decided I should do three sides.  You never know where that bed might move to in the bedroom!  I really like how it turned out -- and it was VERY simple.  I used another (hideous!) twin-sized flat sheet as the center part.  (It's not rocket science by any means, but if anyone wants directions I could write them up.) 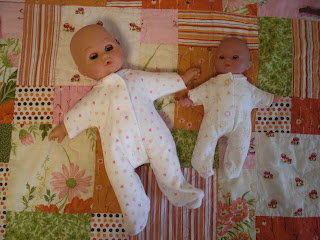 THEN, as I was madly sewing away, JellyBean was on the loose in my sewing room and found my bin full of baby clothes intended to be turned into doll clothes.  On top were two little dollies -- JellyBean JOY!  She was just as pleased as could be!  Since they were basically nude, I snatched them up after bedtime and whipped together some little jammies for them using my baby clothes to doll clothes tutorial.  They still need cuffs on their sleeves, but at least they're not running around naked anymore! 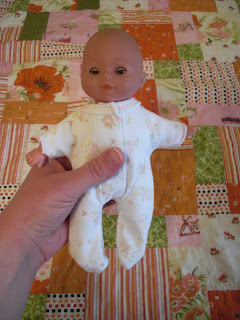 Look how TINY!  This one is my favorite!!

When JellyBean found her dollies again this morning, she squealed with delight!

I love it when my daughter finds dolls too! It makes me smile and think of my childhood love of dolls! I also ADORE your tutorial for baby clothes to doll clothes! Thank you!

Cute!! I don't have any babies yet, but I'll have to keep your tutorial in mind when the time comes :) Christine

everything is looking great. i love the little dolly jammies!!! what a fun idea.

So cute! Love the tiny ones, especially.

Yeah!! The bedding turned out wonderful!

*sigh* I miss baby dolls. Ours have LONG since been retired and passed on to younger cousins, friends and neighbors.

I can imagine! I actually have "making doll clothes" on my to-do list since ... well, for too long. I am hoping that I might be able to cross it off for Easter ... we'll see how that goes ... Your tutorials will come in really handy! :-)

You really got your sew-jo back! Everything is looking wonderful!

i LOVE how simple the baby to doll clothes instructions are, and made them for my 1yr old's first baby doll for christmas last year. so so cute. thanks!