I haven't done this much sewing in one day in AGES! And yet I still haven't had enough!!

First up: Independence Day shirts for the boys. 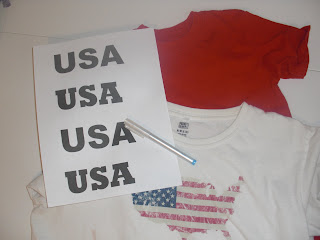 Two red shirts, two old, VERY DEAD flag shirts, a printout of "USA" in a font I liked, and a disappearing ink marker. 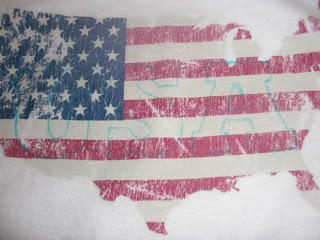 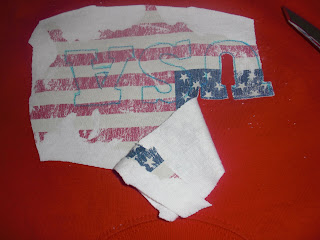 I straight-stitched around the letters, then cut away the excess. 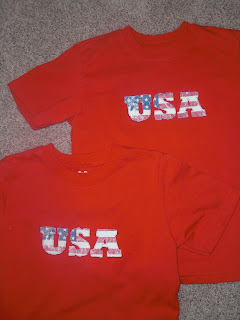 Next up: A skirt and onesie for JellyBean. 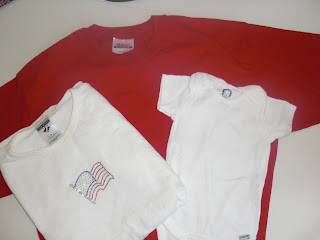 I was very inspired by Ashley's 4th of July refashion for her daughter over at Lil Blue Boo, and made JellyBean a new outfit using some of the same methods.

First I cut around the rhinestone flag from a years-past shirt of my own and appliqued it onto a onesie. 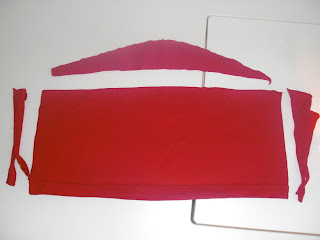 Then I used only the sleeves of this DOLLAR STORE shirt to make the skirt. (I already had plans for the rest of the shirt!) 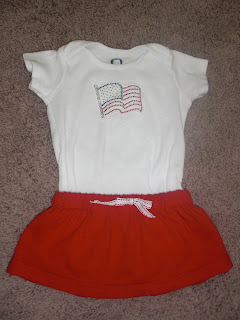 As I was looking for my scissors in my sewing drawer I found a little scrap of ribbon perfect for a faux tie on the skirt! 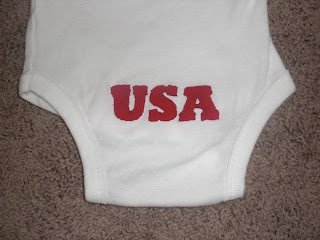 Since the skirt is so short, I couldn't resist using one of the sleeve scraps to put a little message on JellyBean's cute little bum! 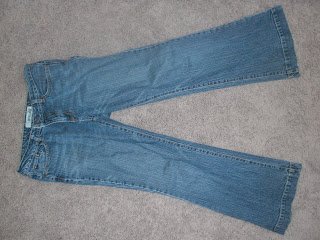 I took these thrift store pants with a GIANT hem, and.... 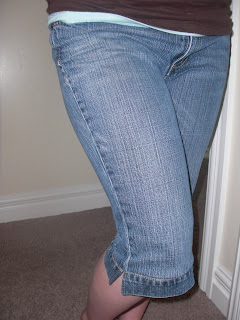 ...made myself some capris!! Being the lil' shortie that I am, I have a hard time finding capris that don't look like ridiculously short pants on me. I just whacked off the legs, then chopped off the hem and reattached it. I also created little vents on the sides for interest. I've been wearing them all day, hot off the sewing machine! 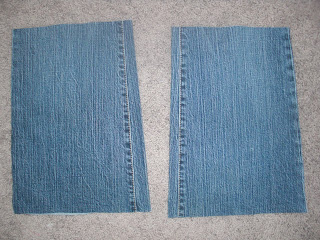 Then, since the onesie-skirt combo wasn't quiiiiiite girly enough for me... 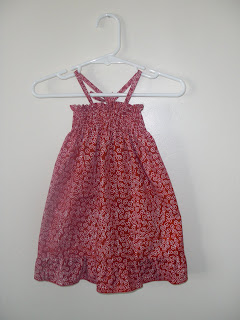 ...I made a sundress, too! I added a ruffle this time. It is absolutely ADORABLE on my little JellyBean!!!

Well, I have guests coming in ten minutes. Guess I'd better use those ten minutes to get ready for them!
Posted by Care at 5:31 PM

Cute stuff! I love the jeans, I'll have to try that idea. I'm here from the cluck cluck sew link fest, I really like your site!

Now I really am jealous and want to learn to sew...I love the capris! They are really cute!

LOVE the capris redo! That is such a good idea! Especially since I'm tall and I can't ever find thrift jeans long enough, I could just cut them off! Great idea! Thanks for stopping by and adding your link! -Allison