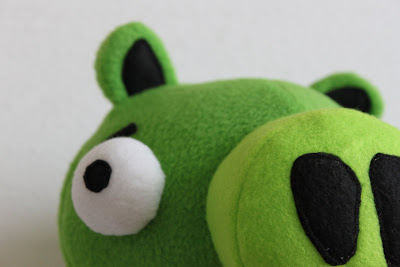 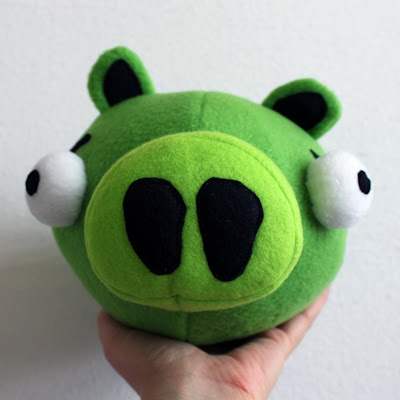 The plush Angry Birds pig, in all his glory...
...looking slightly dimwitted, as he should!

I confess this tutorial may be ever-so-slightly sketchy, which is not my favorite way to do things. But. At least I can get this posted with (hopefully) enough time for you to make one before Christmas -- and with enough time left over for ME to work on my other Christmas items!!

Throughout my instructions I am going to assume you've already made the original Angry Bird -- and therefore can follow along. The basic concept is the same!

STEP ONE: Cut four body pieces, two of each ear pattern, two eye pieces, and one each of the snout pieces. Applique the pupils and insides of the ears using your free-motion or regular sewing foot. Sewing from the back is very helpful, so you can see what you are doing! 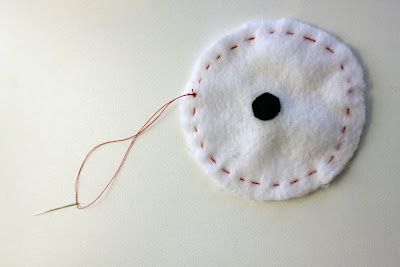 STEP TWO: Eyes! Take a running stitch around the eye, 1/4" from the edge. 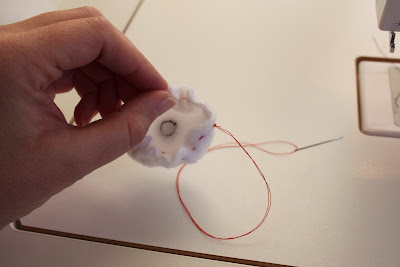 Begin drawing it up tight by pulling the tail of your thread. Leave just enough room to stuff it full of fiberfill. 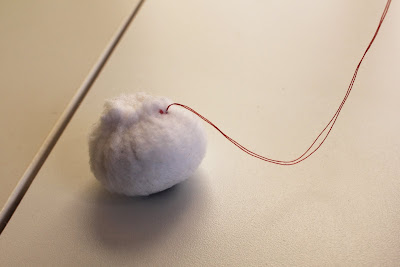 Pull it tight and tie a firm knot. Leave that thread tail and needle attached for when you sew it to piggy's body!
Repeat for second eye. 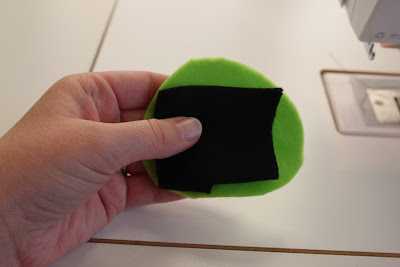 STEP THREE: Snout! Applique the nostrils onto snout piece 1. I just layer a scrap of black fleece on the front... 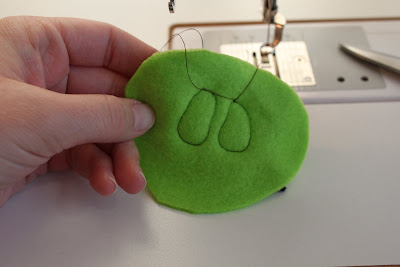 ...then flip it over and sew from the back. Again, an easy way to get the placement right! 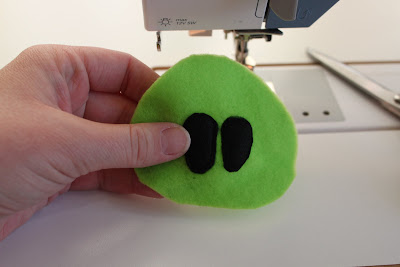 Trim away the excess fleece and you have perfect nostrils! 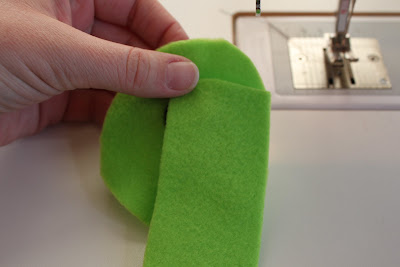 STEP FOUR: Layer your snout piece 2 on top of piece 1, lining up the seam allowances. You are starting at the BOTTOM of snout piece 1. 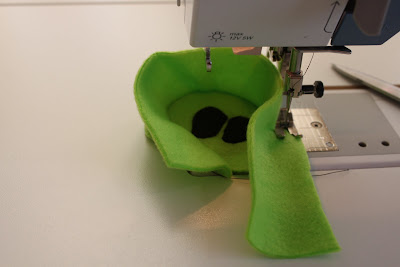 Sew all the way around with a 1/4" seam allowance, matching the edges of the pieces as you go, and stopping when you get back around to your starting point. 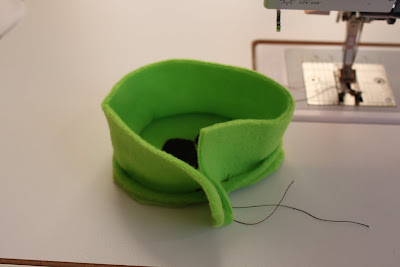 This is what you'll have. 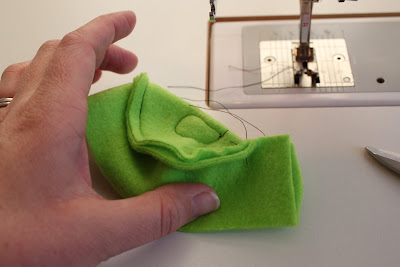 Lay your snout piece 2 pieces right sides together, as shown, and sew straight down from the meeting point at the top. 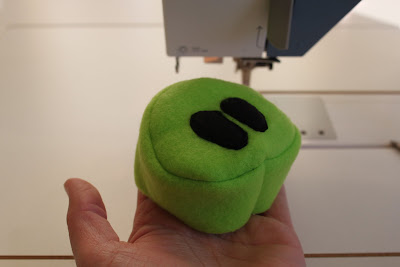 Trim away the excess from that final seam and flip it right side out. You have a piggie snout! 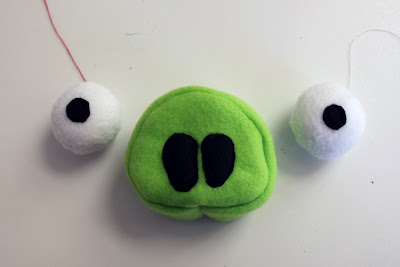 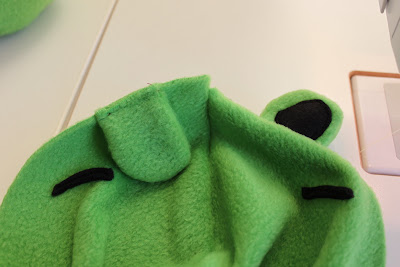 Applique one eyebrow onto each of two body pieces. Make sure you mirror the first eyebrow so they'll look right. Sew the two front pieces together, and the two back pieces together. When I sewed the front to the back I opted to sew the ears in place with a scant 1/4" seam allowance rather than pinning -- it seemed to work so much better with all those thick seams.

Sew the front to the back, leaving a hole for turning and stuffing. Stuff him, sew the opening shut, and attach his eyes and snout by hand. Done!!

Feel free to add a mouth, crown, mustache, or whatever else you like to your pigs to make your favorite characters! 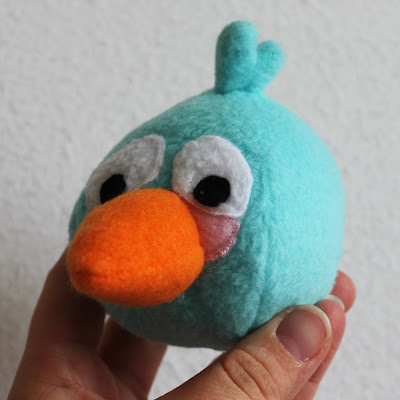 (The pattern for this little blue Angry Bird is also included in the pig pattern. The concept is just the same as the original Angry Bird -- just do the pink circles under his eyes first!)
Posted by Care at 11:58 AM

Thank you! I have just last night finished a red bird and now I can get started on a green pig. They are so much fun, and my 4 yo is going to love them. Thank you again for sharing these tutorials with all of us.

I need to run and get some fleece, but I'm definitely making these for hubby for Christmas!

Oh we (yes, me too) are all so addicted to this game!!! Thanks so much for the tutorial - and the idea! I'll be scrambling to get these done for stockings this year!!!

Your angry bird stuff is so cute. My husband and myself are a little obsessed with the game.

OH MY!!!! He is ADORABLE!!! I made an angry bird for my 24 year old son and I am in the midst of making the angry bird ornaments- up to the hats! I will have to make a pig too. Thank you soo much!!!! LOVE IT

Your angry bird posts are killin me! I downloaded the game for my son and now he's addicted too. If he ever starts launching things in the house I'm coming back to these tutes. You're great!

Love it! I just showed my husband and he wants one!

Country Girl in the City said...

Very cool. Would love to make them for my husband and son. I have been looking round on-line for felt, but I'm not really sure what to buy that would be good quality. Can anyone offer a suggestion?

Aaaah so cool! I would love to make a whole bunch of these and set up the game in our livingroom. :)

My daughter has been begging me for these since she accidentally (I really, really tried to hide it from her, knowing the consequences) saw the previous Angry Birds post.

I may start making a few for her birthday (who are we kidding... my husband would love a few, too), which is in a couple of months. At the rate I craft, that will be a good length of time to gather a good bunch.

Ha! Those are so funny!

Just a quick note to let you know that a link to this post will be placed on CraftCrave today [16 Dec 01:00am GMT]. Thanks, Maria

I LOVE THIS!! Yes, I'm shouting because I love it THAT much!
I am dying to try it now..

This is sooo adorable!!
Thanks for sharing...

I'm running to the store today to get some fleece! I love your pig! Sooooo cute! You are very talented :)

Just picked up some fleece. I'm hours away from a fabric store, so I went to Fred's and got a fleece throw (on sale and cheaper in yardage) and a plush lamb toy that will be the eyes and tummy! Yay! I'm going to have to cheat and use felt for the eyes.

YEAHH! Wonderful, love it!
Perhaps felt will do too, instead of fleece (with a few adjustments, perhaps?)
Great, thanks very much!

Have a wonderful Christmas!

I LOVE IT! Thanks so much for the tutorial. Maybe I will surprise my husband with one!

So so awesome! I am off to Joann's to get some fleece in colors I don't have. My son (5yo) is going to LOVE these. He is obsessed with that game!

As I'm sitting here trying to get the snout on, I'm thinking next time I'll put the snout and eyes on BEFORE stuffing it. It's worth a shot anyway. :-) Thanks for the pattern!!!

Seeing this tutorial has made me an instant follower! Dying to make this.

I've been sharing these tutes with anyone who's an Angry Birds fan or will listen, for that matter. These are awesome.

LOVE THIS! Gosh, I hope I can get this and the other done to give hubby. He's gonna love these. I grabbed as many colors of felt yesterday while we were out shopping and I am SO glad I got the right colors AND I got this color green too. YAY.

I giggled whilst sewing the original Angry Bird. My husband (Mr. Grumpy) smiled when I showed him the finished article. The kids think it is brilliant (thank-you).
But now I have to spend the Christmas holidays making yellow, white and black ones and a pig and 3 blue ones ('cos the red one bursts into 3).
Pattern and instructions were perfect btw.
Thanks.

OMG!!! You are so awesome. I was looking forward to the tutorial for the pigs, but it turned out so much more fantastic, than I was imagining it. Well - gotta hurry and get some fleece so I can sew one for my hon ;D

Oh and btw. did you check out the official plushs you can get via the angry bird website? The ones you made look THAT MUCH better!

I cant wait to try these out!

You say fleece, can I use felt? Many thanks for all the happiness you are spreading.

With felt you may get a bit of a different look, since it has no stretch to it. Fleece has some stretch which I think helps give the little guys a bit more roundness. Check in my flickr group -- there are a few there that people have made from felt. See this group: http://www.flickr.com/photos/57930043@N07/5328104325/in/pool-obsessivelystitched/

Good luck! Let me know how they turn out! :o)
Care.

Thank you so much. So far I've sent 12 birds to a relocation center in Japan. I am so happy you shared this. Now I need to make a gazillion more for grandchildren. XD

These tutes are so awesome - so far I've made two red birds, one baby pig, a tiny blue bird, and a yellow bird whose beak resembles a carrot. I'm getting ready to even out the numbers with a few more pigs. Then I think I'll find some way to physically replicate the Angry Birds scenarios with a slingshot.

great! actually i love this dolls! ^^

I love your angry birds tutorial.. Thank you so much ..I made a huge angry birds I love it... Thanks a lot...

My mom and I just got iPad twos not too long ago and we are addicted to the game. I can't wait to get the materials gathered and get started on this AWESOME project!!!!! Thanks SOOOOO much!!! P.s. I don't have millions of dollars to spend on the actuall bird stuffed animals. I'm so exited!!!! Can't wait!!!!!

I made the yellow one by hand I am a 13 year old girl!

I've made the red, yellow, black, blue, and a giant red birds and one pig. My son LOVES them!! I would love to post pictures of how they turned out. How do I do that?

My daughter was having a tantrum at wal-mart over an angry bird. I showed her this and she was so excited. Then my mom came to visit and said she had everything to make the red one, and my daughter went home with her that day. We have plans to make many more! Thank you!

I made the red angry bird for my seven year old nephew for Christmas. I had so much fun making it by hand rather than machine sewing it. My nephew loves it so much! He is carrying it around everywhere with him and even takes it to bed. Thank you so much for your pattern and instructions. Making the pig next.

I am so confused as to how to sew the snout on, maybe you could help me :S i have no idea how to do it without the thread showing :S

These angry birds are very cute. A such a tricky way of creating the faces. My Grandson and I are going to make some today. He is very excited to begin making them. Today is the first time I have visited your website. I will be back often. Thanks, Amy Sheppard

This is so much more than i needed!!! but will all come in use thanks!!

I really appreciate your post on these! My nephews are a huge fan and being a college student I didn't have the funds to buy these, $20 a piece. So...thank you. You made Christmas for me and my nephews.

angry blue bird is akin to a shotgun.
The blue, scattershot bird is your second bird that is slightly smaller than it’s red brother. Tapping the screen whilst this bird is en route splits it into three allowing you to attack different areas of the setup.
The scattershot bird is good for attacking multiple pigs in close proximity to each other or attacking a single pig by firing in close range.

I made them with felt i had on hand and it worked just fine! I did just my patterns a little bigger, but it worked great! Love them!

Love it! This pig is great!