Mr. S. recently turned four, and we celebrated over the weekend with a Super Mario Brothers themed party! 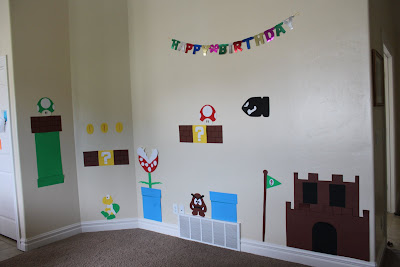 Over the course of a few days I created a large scale mural for the wall, all freehand cut from dollar store posterboards. (Two sheets for a dollar!) I arranged everything to look like a level in the game, complete with the castle and flagpole at the end. The flagpole later became a pin-the-tail type of game -- Pin the flag on the flagpole! 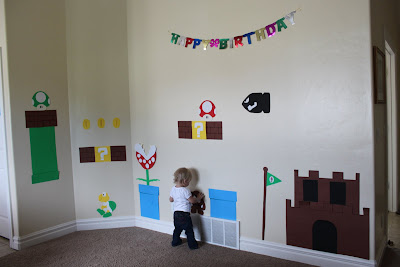 We had to move one of our couches to accomodate the mural. To give you an idea of the scale, here's a shot of JellyBean checking out the Goomba. The mural was quite a lot of work -- but I admit I was having so much fun that it didn't feel like a lot of work to me! 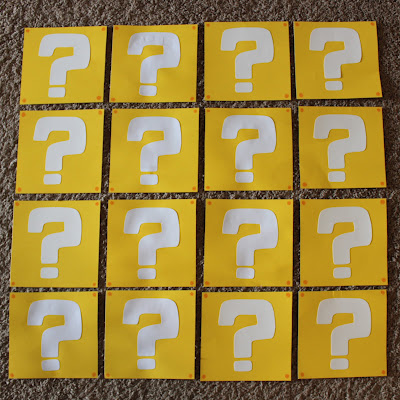 Another party game I created was a "memory" or "concentration" game. The posterboard squares are about 7 1/2" square. 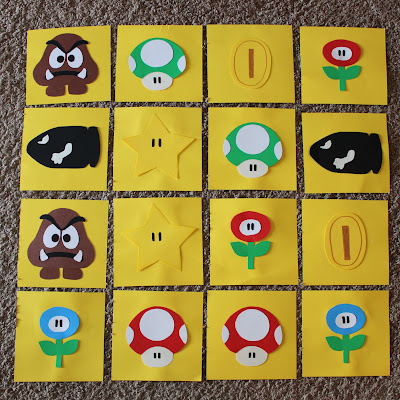 On the flip sides of the squares, I created more posterboard characters. Once again, a lot of work, but it didn't feel that way to me!

nicely done! I like the memory game activity, in particular. Bet it was a fun party.

That is terrific! My oldest son would have a conniption! Great job!

This is so neat!! I have to share this hilarious video with you... it's a little slow getting started but it is too funny! College students doing Super Mario Brothers LIVE at a talent show:

so fun! We are mario lovers at our house too! I will have to keep this in mind. Love the mural!

That is such a cool party. I love all of it and you are right it isn't a lot of work but it is a lot of fun.

oooh! I can't wait to see the rest! My hubby would love this. haha he's a kid at heart! BIG nintendo fan. I can imagine all the hard work you put into this. the mural looks amazing!

You are the coolest mom ever.

How fun!! What a great idea

This looks amazing. I am sorry we weren't able to make it. Hope he had a great birthday.

You forgot your wonderful party favors and cake! You are a talented lady!

Very cool! My 7 year old son had a Mario birthday party in March. I made the cake and made a bingo game with the characters. I reall like your memory game! Super cool.

Ode to the awesomeness! I just LOVE little kid parties! You can get so creative with the themes. I just adore your mural and game! Your sis did great with the cake and the party hats and favors to match... great!

This is fantastic! (And I'm glad to hear about transfer paper that works with dark shirts.) My son is on and off obsessed with Mario. If he ever wants a Mario party, I know now a great resource for ideas. Thanks!