It's the first week of school around here, and there has been NO sewing happening.
I can show you a few things I've worked on in the past few weeks, though! 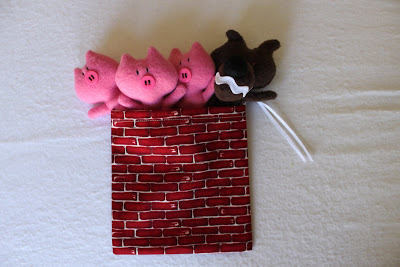 I made a 3 Little Pigs finger puppet set (tutorial HERE!) for a little exchange I did with Darling Petunia. LOVE the brick pouch! 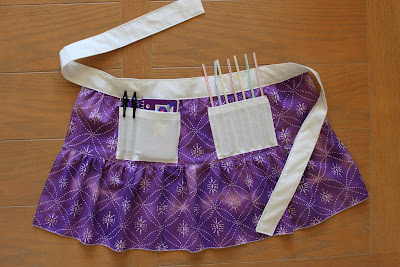 It was my niece's birthday last month, and her special request was for a waitress apron. She was pretty specific: It had to be a half apron in a "girl color," with a spot for a notepad and pen so she could write her customers' orders. But I wanted to do two pockets -- so I made one specifically for straws, with enough divisions so she could have one straw for each member of the family. I hear the apron was a huge success! 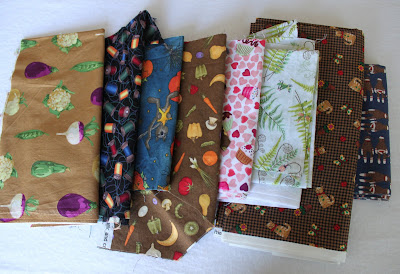 One of my readers, Angela Pea, (who literally is one of my very first readers!) did a little cleaning out in her sewing room and offered to send me some fabric scraps to use as I-Spies. Hello! Can I EVER say no to I-Spies?? :oD It was a hearty yes, and look what she sent! I love them all -- especially the thread spools and sock monkeys and cupcakes -- but my absolute favorite is that one on the left! Those veggies are FANTASTIC! The eggplant is my favorite! 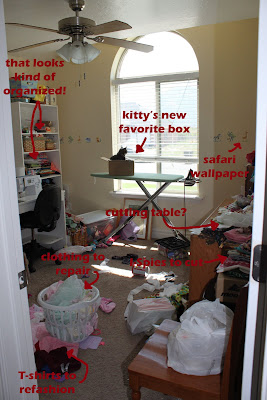 So... speaking of cleaning out sewing rooms... This photo is rather embarassing but maybe it will inspire me to do something about it. I am certain this is much of the reason why I haven't been doing much sewing, and therefore why my blog has been rather quiet as of late. It's madness in there!! It doesn't help that JellyBean loves to "help" spread my fabric scraps all over the floor, or that Kitty has claimed the ironing board -- and dresser -- and under the sewing table -- and one of the shelves -- and more! -- as HER spots to sleep. Or the fact that I have so many projects going at once that there is no way to organize my surface areas and get things done!

Time for a major overhaul, and probably some serious project abandonment!!

That is the project for today, while JellyBean is sleeping. And likely for many days to come!! :oD

Organizing is a big task but the end result is always so refreshing;) Love the big window in your room! The waitress apron is adorable!

oh have fun organizing care, you'll really appreciate it once it's all done. :) I know what you mean about not getting much sewing done lately, I think I'll be just trying to get used to our new schedule for a while.

I have a dream of one day having a perfectly organized sewing room. (My husband dreams of this more than I do) I think the best way to revamp the sewing room is IKEA closet system with all the little baskets and the bins and the pant rack for hanging yardage. One day I will have a new house and one day a sewing room with walls lined with the closet system. i was also wondering if you are entering any of your quilts into the state fair this week end? I enter all the clothes that I have sewn for my girls through out the year.

Good luck with that! Are you going to paint and eliminate the safari wallpaper? If you do I'd love to help!

Cammie, you even got to see the complete disarray with your OWN EYES last night! At least I vacuumed, before you came over! :o)

Yes, the safari animals are OUT. Although not until I can navigate the rest of the room. And I would love to paint, but have a SERIOUS hard time picking colors!!

First item of serious change, though, will be SHELVES!

Love the fingerpuppets!!! So cute!
And that adorable apron!
And you know what - at least you have a sewing room where you can just close the door if you need to ... if I work on projects (which I kinda always do) everything gets scattered around our whole place which means hubby is annoyed that he finds crafting stuff everywhere and I am annoyed cause I do not find anything that I need ... GRRRR

I'm so pleased that I'm not the only one with creative clutter.

I'll come over and have that room painted, organized and ready for sewing in no time! I DREAM of having a whole room just to spread out in :) For now, I'll have to settle for what I've got, LOL.

I totally understand that organizing. I've been doing that today as well. My sewing area has to be my college desk/sewing spot for now, so it gets kind of complicated! :) I love the little apron, it makes me want to play restaurant too!

Taking a picture does inspire one to do something about it. I took one of my mess and the mess is no more!!! Didn't take as long as I thought. Love the piggies!

You can do it!! Seeing all of that I-Spy fabric inspires me to get sewing again! We've moved and my house is still in shambles but I think sewing might start to clear my mind a little bit!! Keep up the good work with the sewing room!!! It's going to look great!

I love the apron!!! My daughter is always taking orders... I guess I found my next sewing project. :) Love all the I spy fabrics.. and good luck with the organization. I have to do some of that today as well. :)

I LOVE that apron you made. Was that your own design or is that somewhere you can point us in the right direction to? I would love to see a tutorial on making those if it was something you made up. It's just adorable and I'm sure there would be many others who'd love to make one of their own. Thank you.

This is really super funny because I was totally going to comment one day and ask if you had any organizational tips for us! LOL. I have a corner of my room for sewing... one 6' banquet table and one square card table and I'm having trouble making space for both my machine and cutting and supplies, etc. I really want some kind of up-high shelves and organization but don't know where to start. Anyway, maybe when you get it all back in place you can share another picture to give me some ideas? :) Good LUCK!! I feel your pain. :)

Those finger puppets are so darn cute, they get me every time. So great!! Organizing is so much fun (Kidding, I hate it)!!

LOL - I just left a comment on your "Progress" post about my little one "helping" with fabric. Too bad we can't keep their little hands busy with sewing. Think how many more projects we could finish.