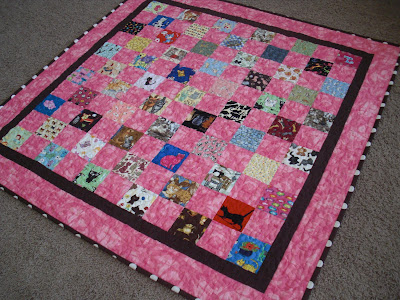 JellyBean LOOOOVES kitties... In fact, "kitty" was her first word! A little while back I started going through all my I-Spies in search of kitty squares and discovered that I had nearly enough to do an entire quilt! I've been keeping my eye out for kitty fabrics ever since.

Over the weekend we spent a little time at my mom's house, and I raided her fabric stash. I took all my kitty fabrics with me, and she and I swapped some around. (She's collecting kitties too!) Finally, I had enough for JellyBean's kitty quilt! 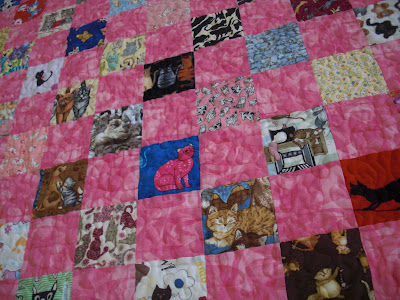 61 different kitties! There are a couple kitties cut from the same fabric, but the cats themselves are different. 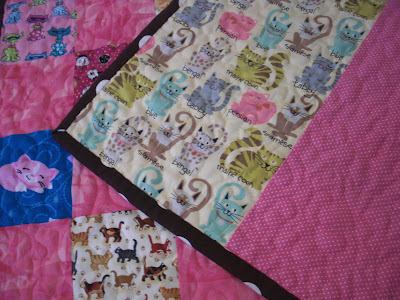 I am in LOVE with the kitties I found for the back!

She loves her new quilt, and has been plopping herself down right in the middle of it and pointing at each square, saying "KITty!! KITTy!!! KITTY!!!" in her cute little voice.

It was SO worth all the effort and all the collecting! :o)
Posted by Care at 12:11 PM

That is soooo cute!

I love the polka dot binding! Who would have thought such a big print would work so well! Great choice!!!

Now I want to make one, too... I need more fabric, waaaah!

But this is awesome. Lucky little Jellybean.

how sweet! what a great idea, to do a theme i-spy!

I have some kitties I could've sent ya!

This is such a cute idea!

Just love how many different cat fabrics that you found! Beautiful work!

Very cute, I just purchased a few fabrics tonight so that I will be ready to join one of your swaps soon;)

Purrrrrrfect!
I can see the cat fabric I sent you in there!
Cool ...

Oh my goodness! I think I would have to make one of those for myself!

I wish I had known you were looking for kitty fabrics! I hosted a swap on my blog a few months back and my aunt participated- she is obsessed with cats. She sent me 800 squares (we only required 100 in our swap) and about 600 of them were kitty fabrics! I still have plenty of extras! :) Ya, I'm thinking of doing a kitty quilt now too, and am glad I can see yours for ideas.

Your daughter is one lucky little lady :) I agree, video please of "kitty, kitty, kitty!"

My daughter would have a fit! I didn't even know that many cat fabrics existed. What a fun idea.

So cute! I have a question, what color thread do you use to quilt your I-Spy quilts? Is it a clear thread?

Yes! I use clear on both the front and the back. It's a little bit fiddly to work with at first, but it really is the only way to go so you don't look like you've "scribbled" all over the I-Spies!

Thanks Care! I was trying to figure it out so that you didn't get the 'scribble' look.