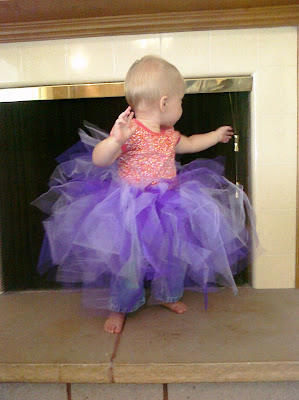 It was my niece's 1st Birthday party today. I whipped up this sooper floofy tutu for her, using this tutorial. There were just a couple things I ended up tweaking, but overall it was very easy, with super clear instructions. And it turned out so cute! I liked leaving it long and wild-looking, although it would be very easy to change the look just by trimming it up.

Here's what I did a little bit differently from Bethany's tutorial: I followed the "two inches smaller than the waist measurement" instruction, but it ended up GIGANTIC. This very well could have been a problem with my elastic choice! I ended up tying a loopy knot so it wouldn't fall off, but that definitely isn't a permanent solution. Also, since I am incredibly scatter-brained these last couple weeks, I tried to go off memory when I was at the fabric store, and ended up buying four yards of tulle instead of six. Duh! I actually really did like how it turned out with just the four yards, but if I had used more it certainly would have been much more "ballerina-y."

Moral of the story: The tutorial was fantastically easy, and I can't wait to do it again. I never had a tutu or anything like it when I was little, but I tell you -- there is just something about it that I was super-loving, even just making one! So, so girly and cute!

Back to my niece: She was quite happy wearing it -- as long as it didn't touch her face!! Her six-year-old sister was quite envious, and even squeezed herself into it for a little while.

Looks like I'm going to be making more of these in the (very near!) future!!

I'm glad you were able to use the tutorial! Your niece looks so cute! I've had some people say that it looks more like a fairy or something when it is left long like that!
Just wondering if there was anything you thought could be explained better, you know, for the others who try out the tutorial! Thanks so much!

I was thinking tutie cutie but then that's not really tutu-ish. I love it!