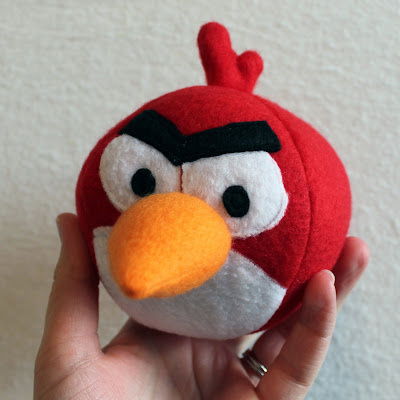 This is my Top Secret Christmas Project!

My boys (husband included, but especially the boys!) are obsessed with the game Angry Birds. They like the game, but they really like to play a real life version they invented, where they chuck objects at each other. (Don't worry! They use safe projectiles for this!) I want to make their game a little more fun for them, so I am creating some Angry Birds and pigs for them to play with!

Again, this is a secret, so it has not been easy to put together a tutorial. I would wait until after Christmas, but... Maybe you want to add them to your secret project list, too?

Update: I now have patterns for the Pig and little blue bird, and for the yellow bird!
And now also the green bird, white bird, black bomb bird, and baby pig! 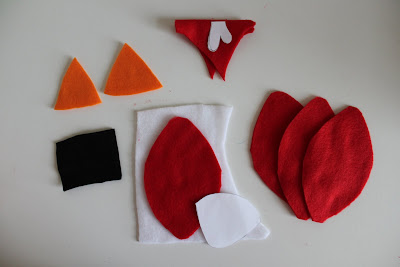 STEP ONE: Cut out 4 body pieces (in the file it has a face drawn on it) in red, a rectangle of white approximately the same size as the red pieces (shown above), a 2"x3" rectangle of black, one of each of the beak patterns in orange, and some scraps to use for creating the feathers for the top of his head. The pattern piece on top of the white and red is the belly of the bird.
NOTE: You want the stretchiest direction of the fleece to go left-to-right! 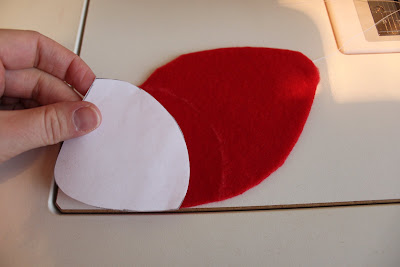 STEP TWO: Cut out the white belly portion of the pattern so you can mark where it goes on the one red panel that will have all his features. On the wrong side of the panel, mark the line. I used chalk, but you could also use pencil or a "disappering ink" marker. 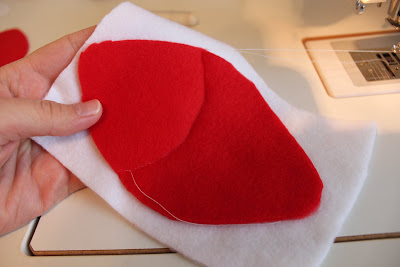 STEP THREE: Layer the panel on top of your white rectangle. BOTH LAYERS should be right side DOWN -- with the marked line showing on top. Sew directly on the line. I used my free-motion foot for this, for speed's sake and to avoid having to lift the presser foot and turn the fabric. 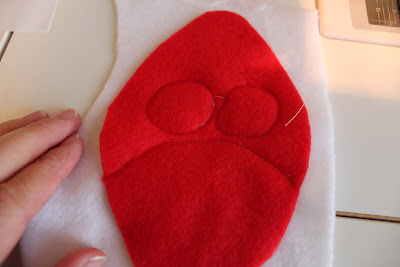 STEP FOUR: "Draw" on the eyes -- still working from the wrong side! Working from the back will make it easy for you to see your previous stitching lines and place the features accordingly. Again, I used my free-motion foot, but you could do this with a regular foot. 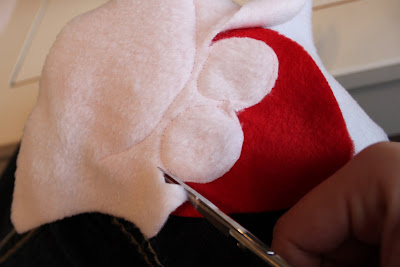 STEP FIVE: Trim away the excess white fleece to reveal your bird's eyes and white belly. 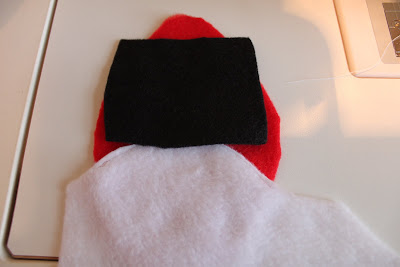 STEP SIX: Layer your black rectangle over the top of your bird's eyes. Be sure there is sufficient area to create his pupils and eyebrows. 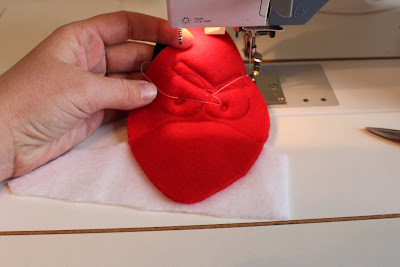 STEP SEVEN: Flip it over and "draw" sew his pupils and eyebrows! He's looking ticked off now! 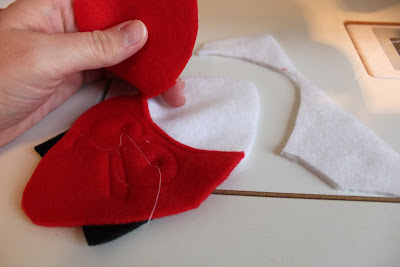 STEP EIGHT: Trim the lower half of your white fleece to match the red, then trim away the excess red, as shown. 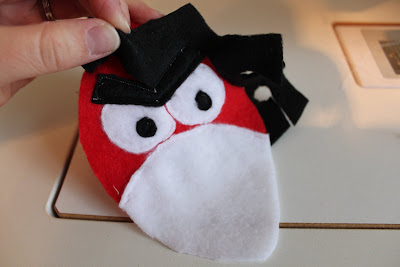 STEP NINE: Trim away the excess black fleece to reveal his eyebrows and pupils. Hee hee! I love it! 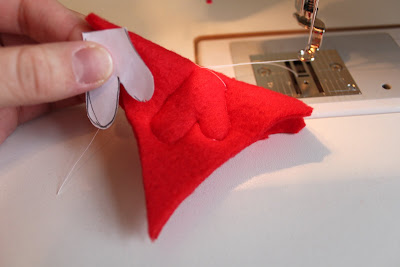 STEP TEN: Create the feathers for the top of his head. REMEMBER: The lines on the feather pattern piece are your SEWING lines, and NOT your cutting lines! I used some small scraps of red fleece and free-motion sewed directly around the pattern piece. 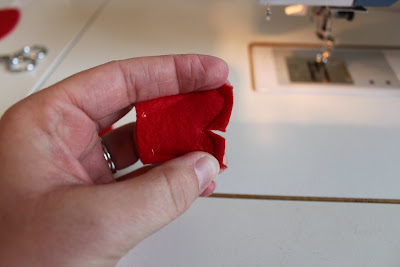 Cut around your sewn lines, remembering to clip almost all the way to your sewing line between the feathers, and turn it right side out. 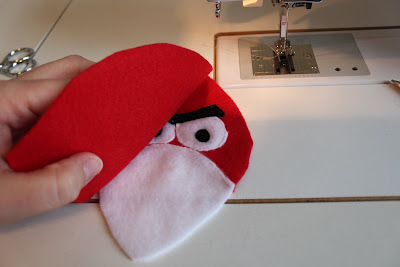 STEP ELEVEN: Layer one of your red panels directly on top of your bird's face, right sides together. Sew down the right hand side of the pieces, using a 3/8" seam allowance. 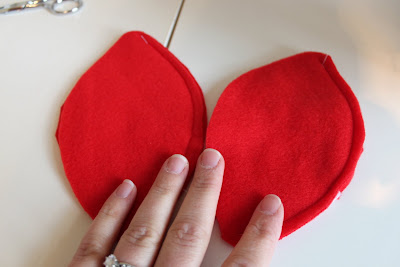 Repeat for the other two panels. Your bird is now put together in two halves. 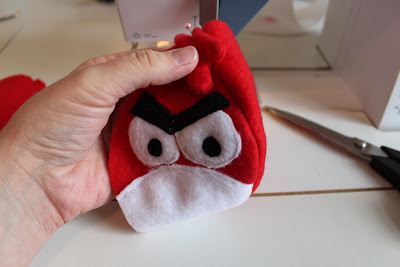 STEP TWELVE: Center your feather piece over the seam on the "face" half of your bird, raw edges together, with the bigger feather on the left, and pin it in place. 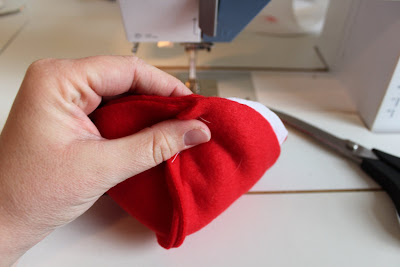 STEP THIRTEEN: Go around to the bottom half of your ball and layer the two halves right sides together with the seams matching. Pin if you like. (I didn't! Lazy!) 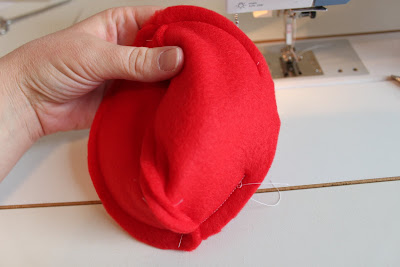 Start sewing a few inches behind the matched seams (so the opening for stuffing will be on the back of the bird, not right by his face), and sew almost all the way around, leaving a few inches for turning and stuffing. 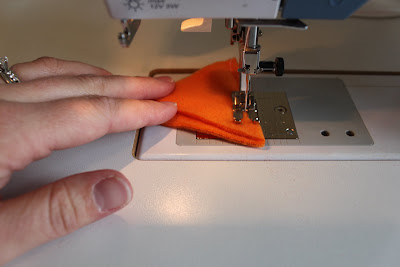 STEP FOURTEEN: The beak! Match your two beak pieces together on one edge, with the smaller piece on top, and sew with 1/4" seam allowance. Stop with the needle DOWN, 1/4" before the point of the beak. 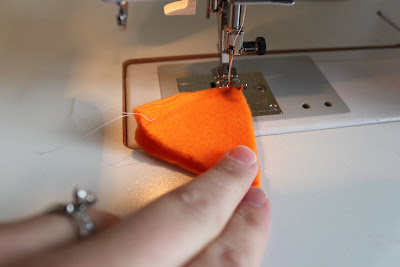 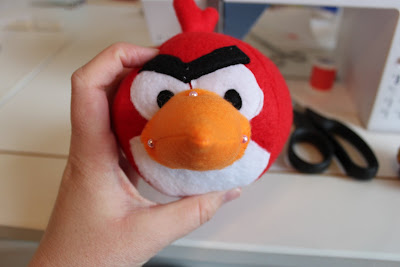 STEP FIFTEEN: Sew on the beak! If you like, you can use four pins to hold the beak in place after you line it up the way you like it. The smaller portion of the beak is the bottom, and the larger portion is the top. 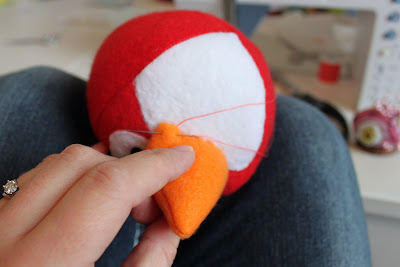 Turn the edges of the beak under as you go, and sew the beak in place. I like to match up the seam of the beak to the line where his white tummy starts.

The red angry birds do have a little black tail, which I chose to omit. If yours must have a tail, you can certainly sew a little tail using the same method as the head feathers, and attach it the same way as the beak. I suppose I may go back and add tails to mine! 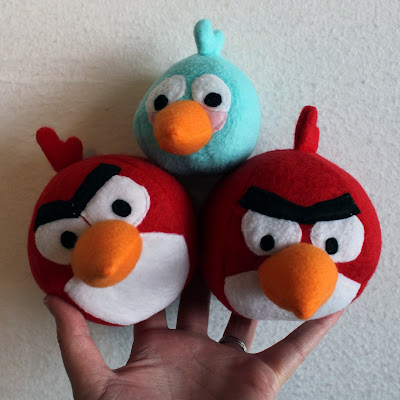 Ta-Da!! They are so very angry -- and CUTE!
Here are a couple of my red birds with a little blue one. I do plan on making all the different "breeds." The method is the same, with slightly different facial features. Of course there are some egg-shaped birds, and that pyramid-shaped yellow bird -- which will require a different basic pattern. But they are in the works! If anyone is interested in patterns for the other birds -- or the PIGS, which I am in the middle of creating -- let me know!